Dog Laser Therapy May Help With IVDD – Part I

Dog Laser Therapy
May Be An Option
for Your Pup! – Part I 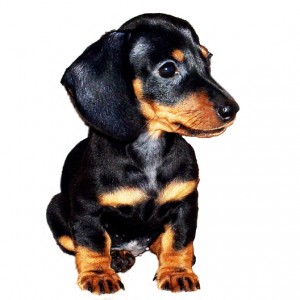 Dog Laser Therapy for dogs with Intervertebral Disk Disease (IVDD) is too many times an unknown procedure, often leaving only two options to the dog and to the family; costly surgery, or euthanasia.

Yesterday, through his sister, I heard of an elderly gentleman living in another state, whose Lab “went down” on Monday. He wept on the phone as he told his sister that the only choice he had been given for his precious pet companion was euthanasia—it occurred on the following day and he was heart-broken.

Dixie belongs to our middle son and his wife. She’s a very happy, loving, and energetic Dachshund, and at the time of this writing four and one-half years old. She is the focus and inspiration of this story of hustle and hope about her encounter with IVDD and dog laser therapy.

Dog Laser Therapy May Be A
Need to Know for Other Breeds! 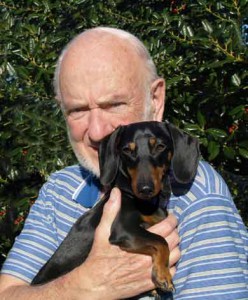 Dixie is Stephen and Mary’s puppy and lives in High Point, NC, often coming to visit with us in Fincastle, Virginia. She was here on Saturday, March 10, 2012. After having Stephen take some photos of her in my arms (left), as I carefully put her down in the grass, she yelped, and I said, “Oh, oh!” Throughout that weekend, she told us a couple of times that she was in pain. On Sunday afternoon they packed up to return to their home in High Point. That night and into Monday morning, Stephen called us several times that she had “gone down” in her rear quarters which all of us thought might be Intervertebral Disk Disease (IVDD), a debilitating and costly disease that affects Dachshunds, Corgis, Papillion’s, Basset Hounds, and some other breeds, but is particularly prevalent in Dachshunds.

With or without surgery, a dog can experience multiple intervertebral disk disease episodes during his/her life. As Brisson el al noted, “All intervertebral disks in dogs are susceptible to degeneration; therefore, a dog can have several episodes of disk extrusion.”¹ They continued, “Dachshunds were found to be approximately 10 times more likely to have recurrence than other breeds . . . “

The disease effects the flexible discs made up of cartilage which cushions between each bone (vertebrae) of the spinal cord, extending from the base of the skull to the end of the tail. The swollen, herniated disc puts pressure on the spinal cord and other nerve endings in the area. This is very painful and the pressure on the spinal cord prevents nerve impulses from passing between the brain and the rear of the body so that the dog cannot walk or control its colon or bladder. Neglect will result in quickly bringing severe damage to the spinal cord and can lead to total and permanent paralysis. Here is the x-ray taken of Dixie’s spine on the following Tuesday, at the Hanging Rock Animal Hospital, here in Roanoke.

After visits to two Emergency Veterinary Hospitals in the Triad, the doctors confirmed IVDD and sent Dixie home with pain and anti-inflammatory medications and orders for complete cage rest until Stephen and Mary could contact their regular doctor when the office opened on Monday morning. They had been told that surgery would probably be necessary, and it should be done within 48 hours to avoid permanent paralysis, and that it would cost about $5,000. There was no mention of the option of laser therapy.

I asked Stephen to not make any final decisions about Dixie for the moment until I could make some phone calls. As soon as offices were open on Monday morning, I called both the Hanging rock Animal Hospital,² just 10 miles south on I-81, and the Virginia Tech College of Veterinary Medicine in Blacksburg, Virginia, about forty miles southwest of our home. We had taken our three year old Dachshund, Cocoa, to Tech for successful back surgery because of IVDD, twice for two different locations on her spinal cord, six months apart, in 2000. We paid at that time $2,500 for each surgery. They told me at VTCVM, that surgery for Dixie in 2012 would cost $3,700, including a CT, or MRI. 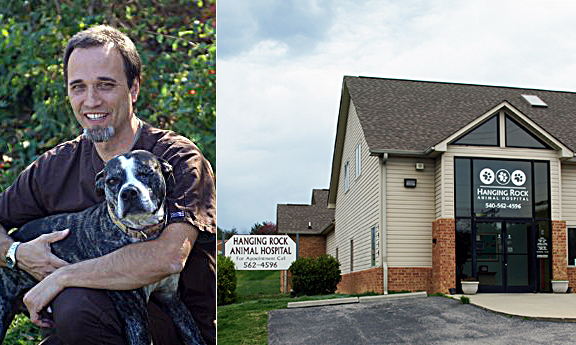 I then reported back to Stephen what I had found out, and together we decided to bring her to the Hanging Rock Animal Hospital to see Dr. Todd Czarnecki, DVA, CVA, (above) for a consultation. In talking with him last year he told us that he was working toward a promising new non-surgical procedure for dogs who had been struck down with IVDD. He was using laser therapy for dogs. It was a chance, but we had hope that it would be the right choice for Dixie, and as the months have passed by, it was.

So on Tuesday, March 13, I met Stephen, half-way to High Point, picked up Dixie and took her back to Roanoke to see Dr. Todd for an evaluation. He said she was a great candidate for laser therapy for dogs, and he would like to see her treated twice a week for eight weeks beginning today. She was given her first treatment that afternoon—no invasive surgery, no sedative, no needles, no pain, and no long healing process, just the weekly treatments, some TLC and cage rest. The laser therapy treatments would last about 10-15 minutes and the only sensation for her would be a slight warming in the area being treated—and the cost for the total package of laser therapy would be just under $500. 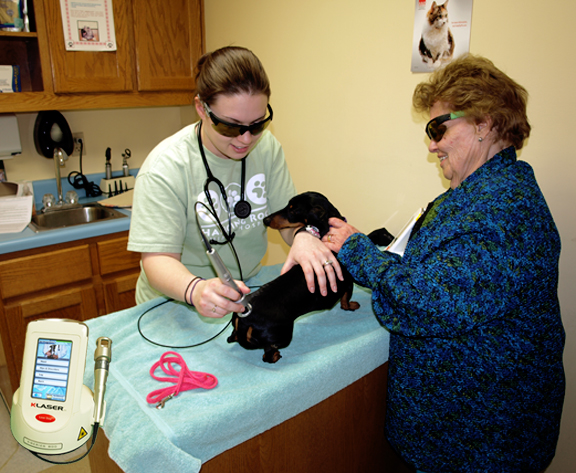 Here is Stephen’s mother Eva, with Dixie as the first Laser Therapy treatment is administered by one of the Licensed Veterinary Technicians at Hanging Rock Animal Hospital (above). She and Dr. Todd both said, “We have seen this therapy do miracles for the dogs we have treated!”_________

1 Brisson BA, Moffatt SL, Swayne SL, et al. Recurrence of thoracolumbar intervertebral disk extrusion in chondrodystrophic dogs after surgical decompression with or without prophylactic fenestration: 265 cases (1995-1999). J Am Vet Med Assoc. 2004;224:1808-1814. 2 Hanging Rock Animal Hospital is accredited by the American Animal Hospital Association and, as far as I know, at this writing is the only animal hospital in the Roanoke Valley to offer K-Laser Therapy for dogs in treating IVDD for their patients.