Days after it was discovered, the stolen war dog story went national. This brought to light the military’s, 16-month-long separation of the two, injured Army Specialist Brent Grommet and his war dog, Matty. They were finally reunited last Friday, November 14, 2014.

“I’m about the happiest I’ve ever been,” Brent, 23, told reporters.

Brent and Matty, who specialized in detecting IEDs, (Improvised Explosive Devices) or a homemade bomb, were injured when one exploded near them in Afghanistan. Brent came back to the United States, separated from his military dog by the army, in July of 2013. It would be more than 16 months before he would see his dog again.

Brent Grommet and Matty, is seen in the photo, lower right, with their crew in Afghanistan. 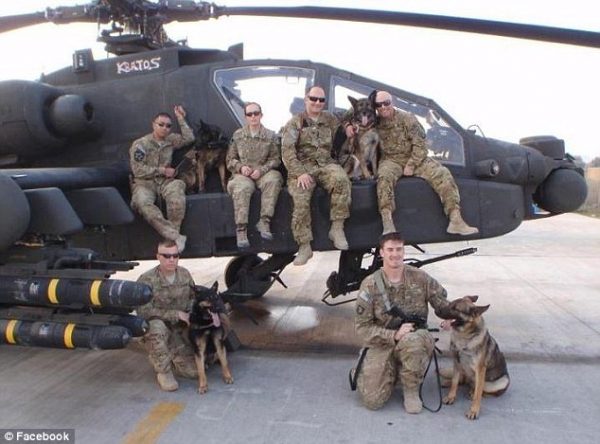 Meanwhile, Brent suffered with PTSD, traumatic brain injury, migraines, severe chronic back pain and breathing problems. He also missed his dog. Under Robby’s Law, signed by President Clinton in 2000, military dog handlers have the first right to adopt their animals if injured together. While Grommet was in the hospital, he filed papers to adopt Matty, and had it approved. But then for reasons still unclear, the army allowed someone else to adopt the dog. 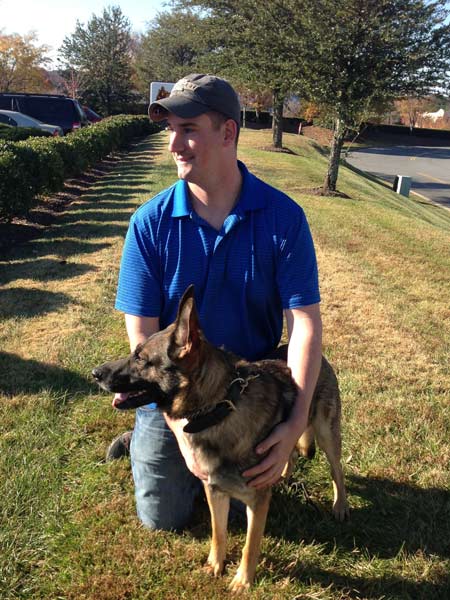 It was when Fox News did a live interview with Brent Grommet’s father last Thursday night, that everything seemed to turn in Brent and Matty’s favor. North Carolina congressman, Richard Hudson, who had heard about the story earlier in the week, helped to find the dog in South Carolina.

On Friday, Brent and his parents, Don and Debbie Grommet, drove 17 hours from Fort Campbell, Kentucky, to South Carolina, where Matty had been living since 2013. When Brent got out of the car, he walked toward the kennel where Matty was, wondering if the dog would remember him.

Of course Matty did.

When the kennel door was opened the dog ran as fast as he could to Brent, who had called his name. He said, “Matty jumped all over me and about tackled me to the ground . . . I couldn’t have asked for a better response. I knew then that he remembered me, and truly wanted to be with me!”

Brent gets out of the army in two months, but is trying to arrange it so Matty can live with him on base at Fort Campbell, until his army service ends.