Digby the Tiny and Nero the Giant

One of these dogs weighs less than a pound and the other 120 pounds,
but that hasn’t prevented them from becoming the best of friends. 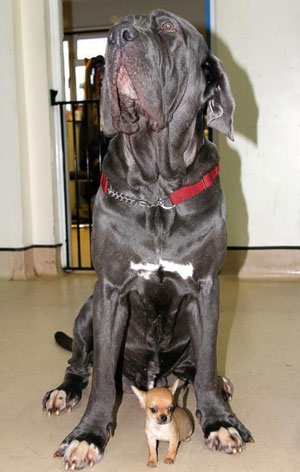 Digby the tiny Chihuahua was close to death when he was rescued from between two dumpsters outside an apartment building in north London. The 5 week-old puppy was scared, cold, and hungry. But since being rescued by the Royal Society for the Prevention of Cruelty to Animals and taken to their center in Southridge, Hertfordshire, on Monday night of this week, he has found a new reason to survive, and it takes the shape of the 130-pound Neapolitan Mastiff, Nero. They have become fast friends.

The Mastiff belongs to the center’s manager, and employees say Nero has really “allowed Digby’s personality to shine.” Anna White, the RSPCA center’s manager said, “It was as if the little fellow took on Nero as his personal minder. Poor Digby had to be rescued once by the RSPCA and it seems like he is taking precautions to make sure nothing can happen to him again.

Natalie Ditchfield, RSPCA animal collection officer, said:
“It is so lovely to see he is safe and happy. When I first came across Digby he was frozen and shaking and had just been left to die. He’s really tiny—small enough to fit in the palm of my hand. He seemed to come out of his shell as soon as we arrived at Southridge and he spotted Nero. It really is a love story. And a remarkable one at that!”

Late word is that the RSPCA have found some folks who want to adopt Digby, and the puppy will soon move in to live with his new forever family.